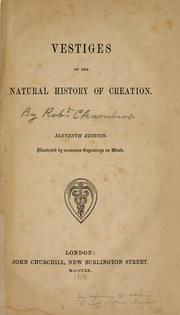 Vestiges of the Natural History of Creation appeared anonymously in 1844.  Its author was Robert Chambers, a publisher and philanthropist of Edinburgh.  Vestiges, “alarmingly popular despite a merciless critical pounding, was regarded by the orthodox as pernicious in the very highest degree.”

This quote comes from the Introduction of Milton Millhauser’s Just Before Darwin (Middletown: Wesleyan University Press, 1959).  The other book I’ve found (which I ran across accidentally, because it mentions Charles Bradlaugh) is James A. Secord’s Victorian Sensation (Chicago: University of Chicago Press, 2000).  I read these because I was developing an impression, after discovering the Erasmus Darwins of Massachusetts, that ideas of biological evolution were popular among regular people for several decades before Charles Darwin’s publication of On the Origin of Species.  It almost seems that Charles Darwin was merely the figure who forced the scientific establishment (represented by the Royal Society) to consider a topic they’d been studiously avoiding or even repressing ever since Darwin’s grandfather Erasmus published his Zoonomia in 1796!

Millhauser says part of the problem with Vestiges is that it was in plain English and it was inexpensive.  This made it available and affordable for the masses.  “Once again,” Millhauser says (when he says again is he referring to Erasmus Darwin?), “the public was informed, by a glib pseudo scientist without even Lamarck’s pretensions to authority, that the true Adam of the human race was a baboon” (5).  This sums up the issue nicely: it has to do with public, rather than scientific, understanding of humanity’s origins.  It has to do with the control of scientific information by an elite cadre of authorities, naturally drawn from the upper classes and educated at the best “public” schools.  And it has to do with the inevitable demise of a biblical creation story that few educated Englishmen actually took seriously, but that nearly all believed should be upheld (like Plato’s Noble Lie) for the common people, especially in lieu of an alternative story that maintained the authority of a state-sponsored institution like the established church.

Millhauser dismisses Erasmus Darwin and Charles Lyell in an endnote, saying “they each devote to evolution only a small portion of a work dealing with some other major theme” (191 n. 4).  This is true, and Vestiges deserves recognition as the first complete book on the subject to achieve wide readership.  But it ignores the relationships between the ideas of Darwin and Lyell and those of Chambers.  Making his case for a serious study of Chambers, Millhauser identifies the issue of synthesis, and especially of synthesis by amateurs.  He says “An early Victorian layman might still feel…that he had perceived a truth that the professionals had somehow managed to ignore or even to hush up, and that this might provide the principle of unification, the frank definition of the central tendency of science, for which the world was waiting” (8).  This is an idea that has particular resonance for me at this point, not least in the political implications such a changed understanding of the world might have on regular people in the early 19th century.